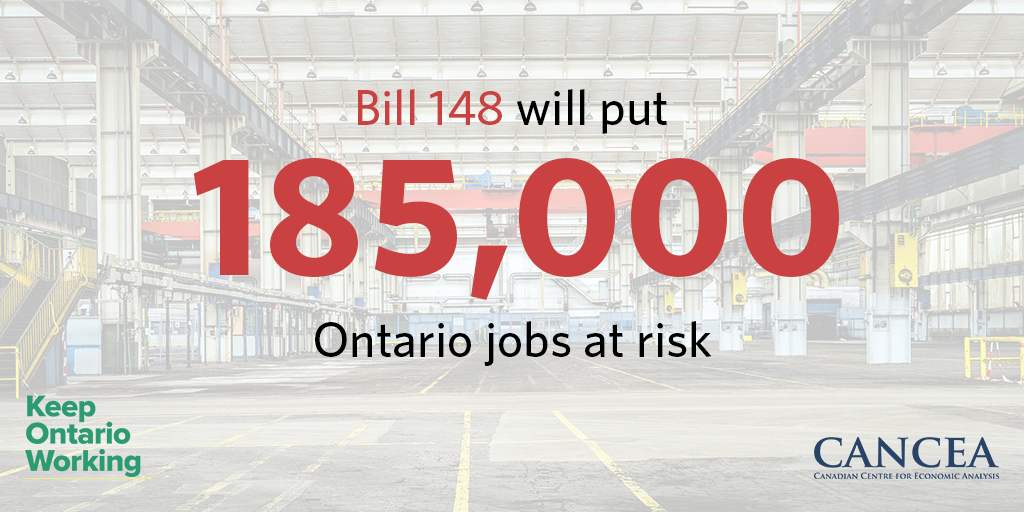 A $23 billion hit to business over the next two years alone; 185,000 Ontario jobs will be at immediate risk over the next two years (30,000 of the jobs at risk are youth under 25 while 96,000 employees at risk are expected to be women); a 50 per cent increase to inflation for this year and the foreseeable future; the cost of everyday consumer goods and services will go up by $1,300 per household on average each and every year; the Ontario government would need to borrow $440 million more to cover the increases in new costs from this legislation; if the government were to provide offsets to businesses, as they have indicated, the province’s treasury will take a bigger hit; and, municipalities will be forced to increase employee wages by $500 million without additional offsetting revenues.

An independent economic impact study has concluded that those are just a few of the consequences of Bill 148.

On Monday, the Keep Ontario Working Coalition (KOW), in partnership with the Ontario Chamber of Commerce (OCC) and the Flamborough Chamber of Commerce (FCC), released the first and only independent economic impact analysis of Bill 148, the Fair Workplaces Better Jobs Act. Conducted by the Canadian Centre for Economic Analysis (CANCEA), the study revealed that if the legislation is implemented as currently drafted, there will be significant, sudden and sizeable uncertainty for Ontario jobs, economy and communities.

CANCEA was commissioned by the KOW coalition to measure the potential impacts of six key areas of change in Bill 148, including changes to minimum wages, “equal pay” provisions, vacation, scheduling, personal emergency leave (PEL) and unionization.

“Simple accounting reveals that the Act creates a $23 billion challenge for Ontario businesses over two years. Annualized, this is 21 per cent of what Ontario businesses invest in capital,” Paul Smetanin, President, CANCEA. “Given the significant, sudden and sizable changes it would be remiss to expect that unintended consequences would not follow.”

In the coming weeks and months, the KOW coalition will release additional components to the economic impact analysis.

“Given the scale of impact and pace of change, it will be impossible for the provincial government to make businesses, even small businesses, whole through offsets,” added Baldauf. “With amendments to the first reading of Bill 148 due this Wednesday, the legislation will need to see serious change including an adjusted timeline for implementation.”